12 Must-See Mosques in the Philippines Muslim Filipinos account for around 6% of the population. The government declared Eid’l Fitr as a regular holiday in 2002 to honor the country’s Islamic heritage. The holiday is decided by the use of the lunar-based Islamic calendar and the sighting of the crescent moon in the Islamic month of Shawwal.

The Festival of Fast-breaking, also known as Eid al-Fitr, is a major religious holiday observed by Muslims around the world that marks the conclusion of Ramadan, the Islamic holy month of fasting. The occasion commemorates the end of Ramadan’s 29 or 30 days of dawn-to-sunset fasting.

As we commemorate their special day, let’s look at some mosques where Filipino Muslims will be celebrating. 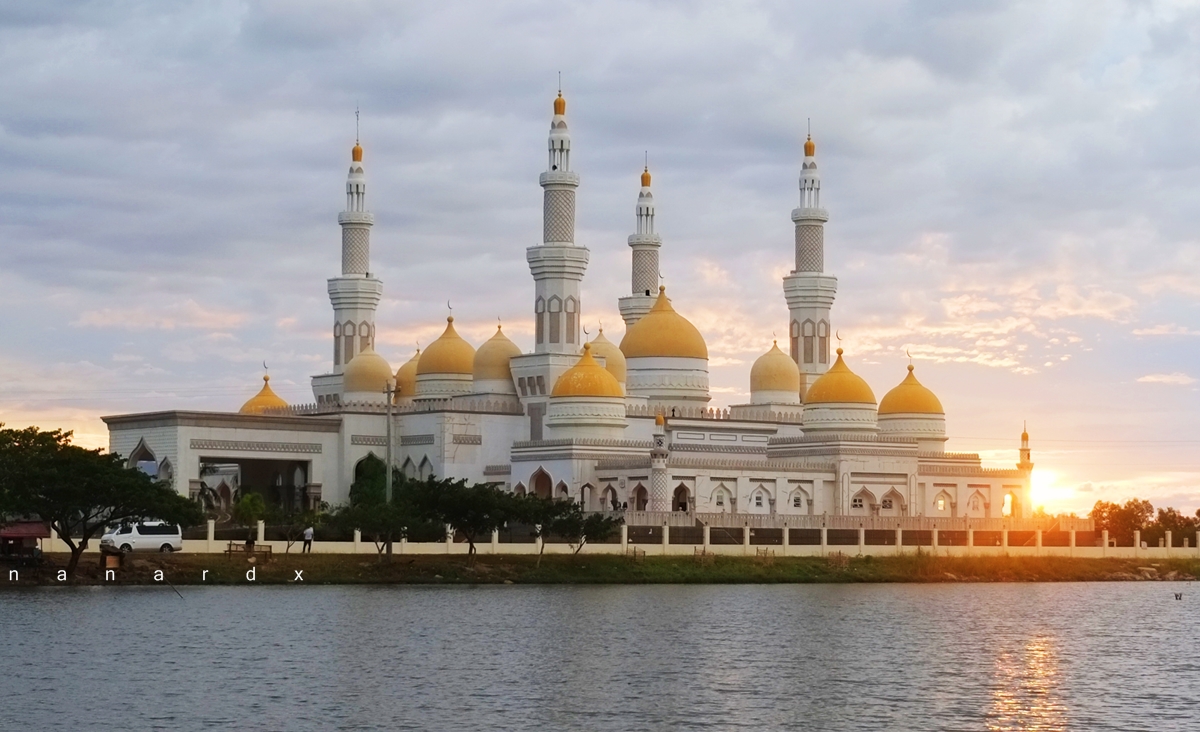 The Grand Mosque, Southeast Asia’s second largest mosque, was built in Cotabato as a sort of respect to the region’s Islamic roots. This massive mosque on Tamontaka Bubong Road is the Philippines’ largest of its kind. This edifice is 5,000 square meters in size and sits on a 5-hectare tract of ground. The Sultan Hassanal Bolkiah Masjid, popularly known as the Grand Mosque or Golden Mosque, has gold-plated domes with over 40-meter-high minarets.

Interestingly, Christian architect Felino Palafox designed the project, which was finished in 2011. Many Christian guards are stationed at the mosque, demonstrating the peaceful coexistence of the region’s various faiths. 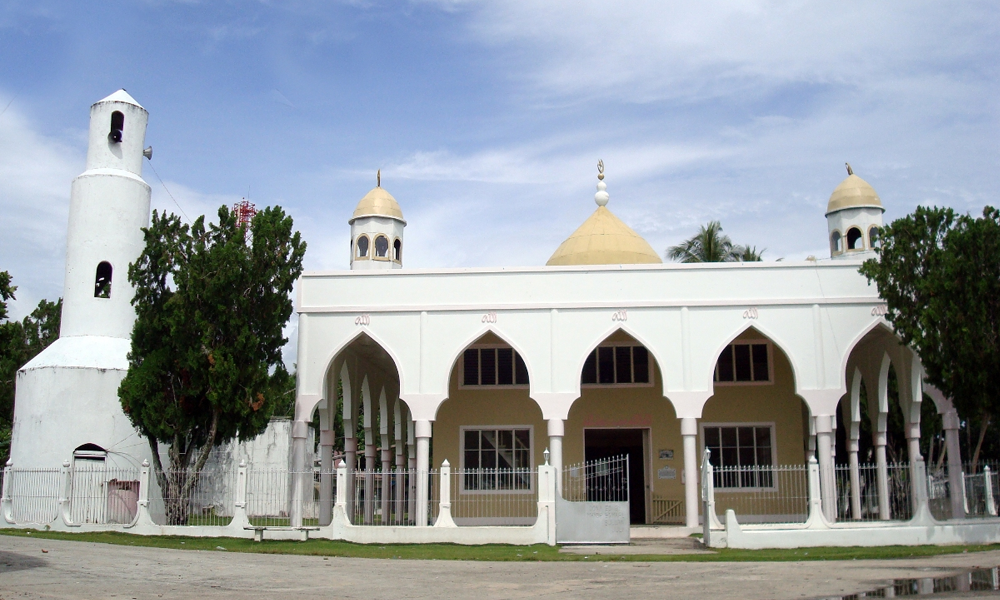 Sheikh Makdum Mosque, as declared by the National Cultural Treasure, is also a historical site in Mindanao that predates the establishment of the Philippine government. In 1965, former President Ferdinand Marcos paid a personal visit to the Masjid and placed a historical monument on the Masjid’s wall. The ancient pillars of the oldest mosque can still be located inside the new structure, as observed.

Every year, the province of Tawi-Tawi remembers the establishment of the country’s first mosque, and Simunur Island is designated as the Cradle of Islam. 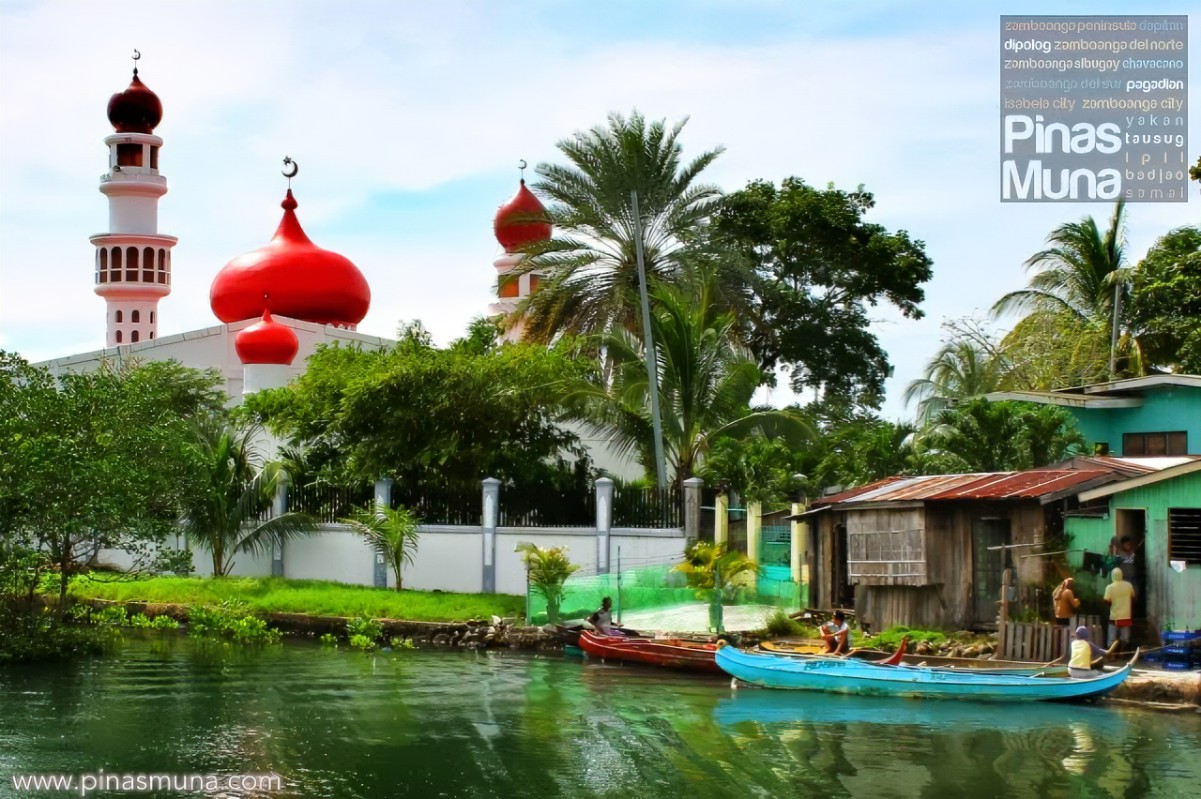 The Taluksangay Mosque (Masjid Taluksangay) is Zamboanga Peninsula’s oldest mosque. The mosque was established in 1885 by Hadji Abdullah Maas Nuno in the seaside barangay of Taluksangay in Zamboanga City. Since then, it has become the epicenter of Islamic dissemination in Western Mindanao.

It has undergone various expansions throughout the years to accommodate the growing community. The mosque has also received significant donations from prominent members of society for reconstruction and maintenance. The Pink Mosque, also known as the Masjid Dimaukom, is a mosque in Datu Saudi Ampatuan, Maguindanao, Philippines completed in 2014. The mosque was painted pink to represent peace and love, and was constructed by Christian laborers to represent unification and interfaith friendship.

Datu Saudi Ampatuan Mayor Samsudin Dimaukom, who is alleged to have sponsored the construction of Masjid Dimaukom and owns the site on which the mosque was built, said that he and his wife chose pink as the color for two reasons: first, it is his favorite color, and second, it represents peace and love.

It stands out from the other mosques in the area, which have neutral-colored walls with gold paint splattered here and there.

Another hamlet in the Province of Maguindanao, about 30 minutes from downtown Cotabato City, is home to the majestic white Masjid Al-Nasser Abpi. This is in the settlement of Datu Odin Sinsuat, in Magelco.

This mosque was recently erected and is mostly painted white. White is probably the second most commonly associated color with Islam, representing cleanliness and serenity. 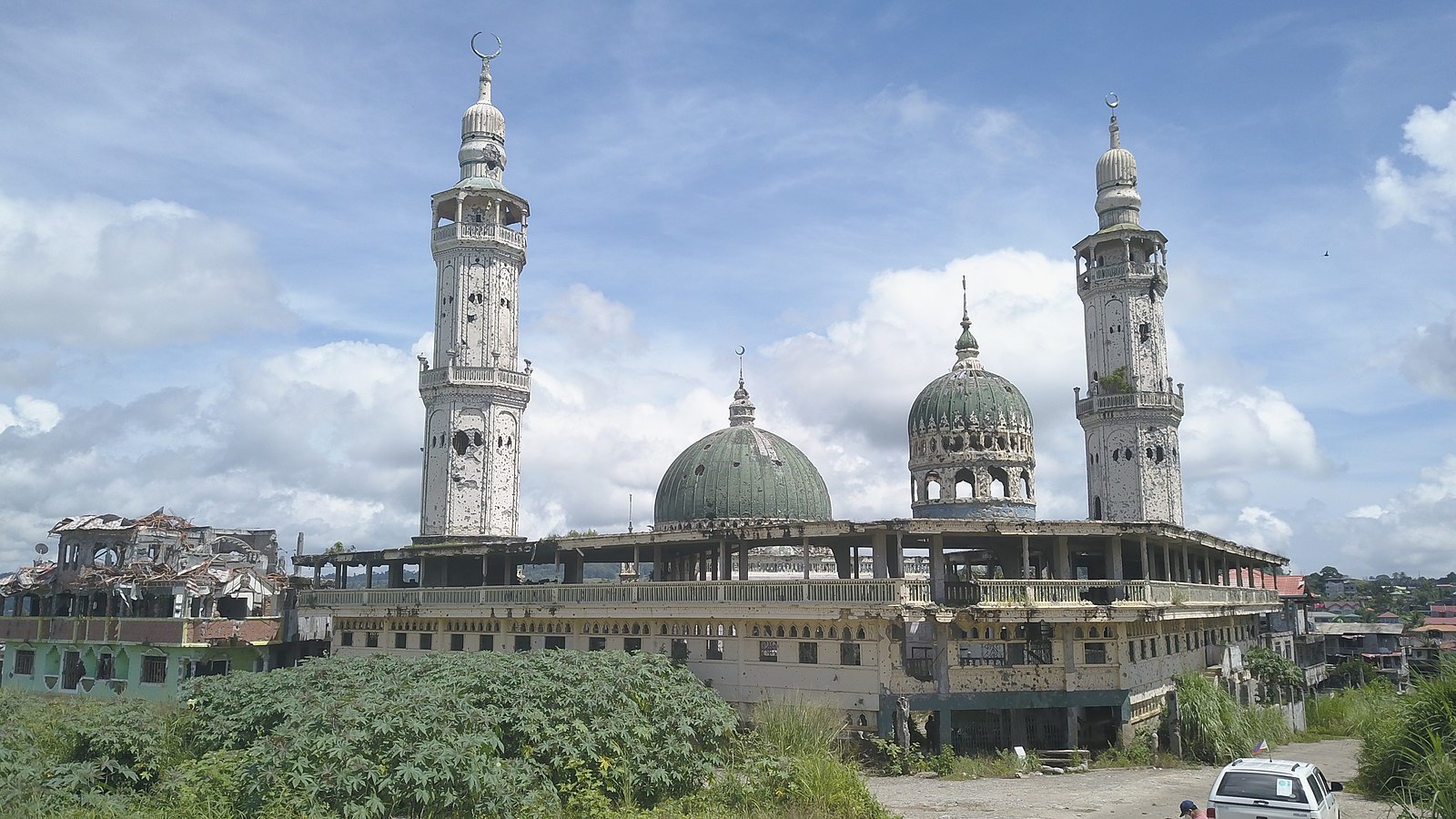 Years after the months-long siege of Marawi in 2017, the city’s citizens can finally look forward to the reopening of one of the city’s most important institutions, which was severely destroyed during the siege.

The renowned mosque now stands proudly glistening with golden, towering domes and symmetrical interiors, far from its dilapidated appearance before its renovation. The mosque has been given the spectacular refurbishment it merits as a hallowed place of prayer among Marawi’s Muslim communities. To begin, the domes are gold-painted, with ornate designs framing the windows.

The open area of the mosque is surrounded with pillars, and the mosque’s entrance is carved in an exquisite, rounded shape. The mosque’s interiors feature a symmetrical space filled with golden themes and Arabic symbols, as well as pillars and windows. A black, square minbar with lettering stands in the center, while a chandelier swings from the ceiling.

7. The Golden Mosque in Quiapo 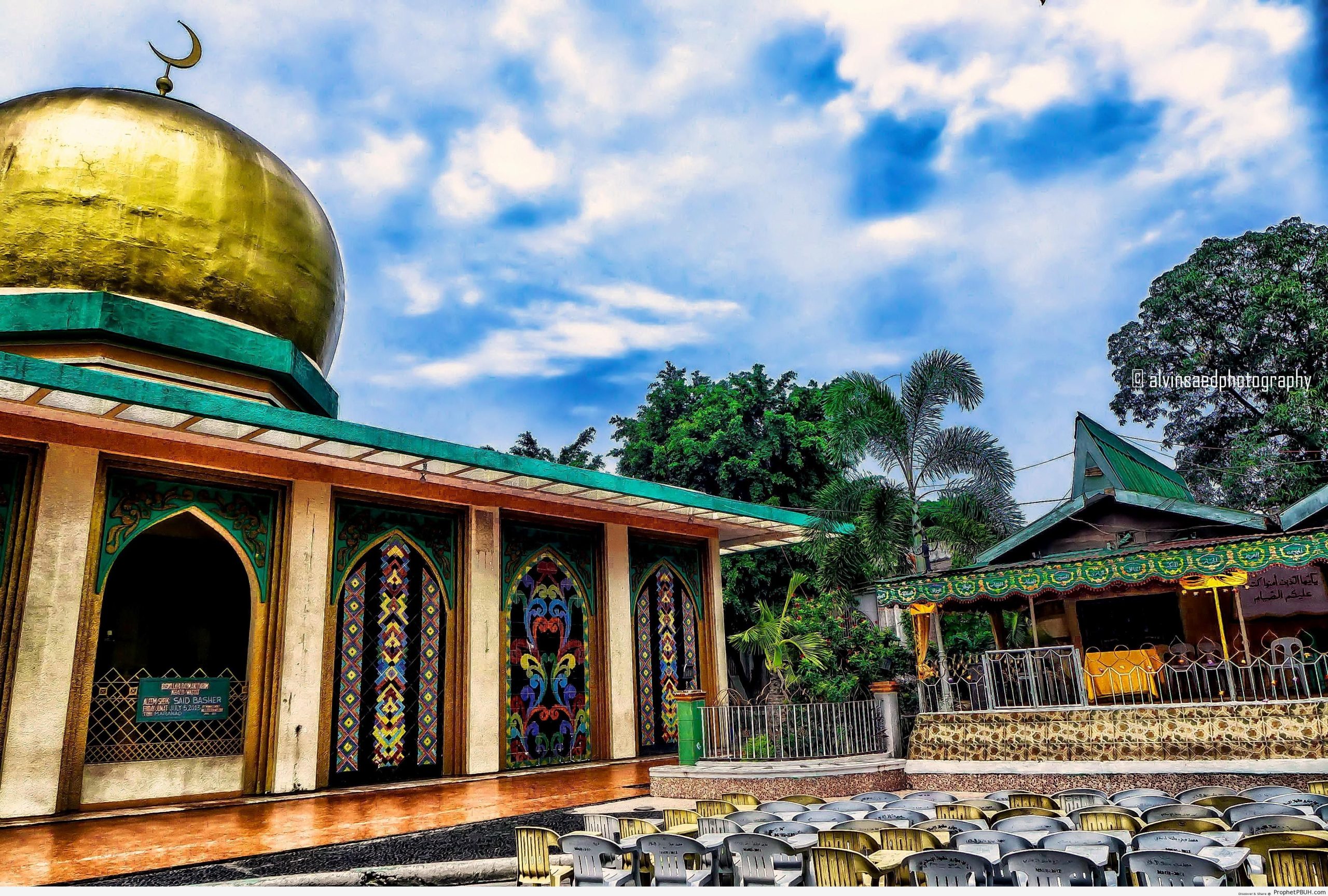 The Golden Mosque, also known as Masjid al-Dahab, is the largest mosque in Metro Manila. It is in the Muslim area of the Quiapo district in Manila, Philippines. The Golden Mosque gets its name from the fact that its dome is coated in gleaming gold. It was built in 1976 under the direction of former Philippine First Lady Imelda Marcos for the visit of Libyan President Muammar al-Gaddafi, but his visit was canceled. It presently serves many members of Manila’s Muslim population, and it is busy on Fridays during Jumuah prayers.

The Golden Mosque, which can hold 3,000 worshipers, is at the end of Globo De Oro Street. The mosque is usually packed every Friday noon during the Islamic day of worship. The mosque’s minaret is currently rusty, and the dome is partially rusted; the mosque is currently undergoing renovation. 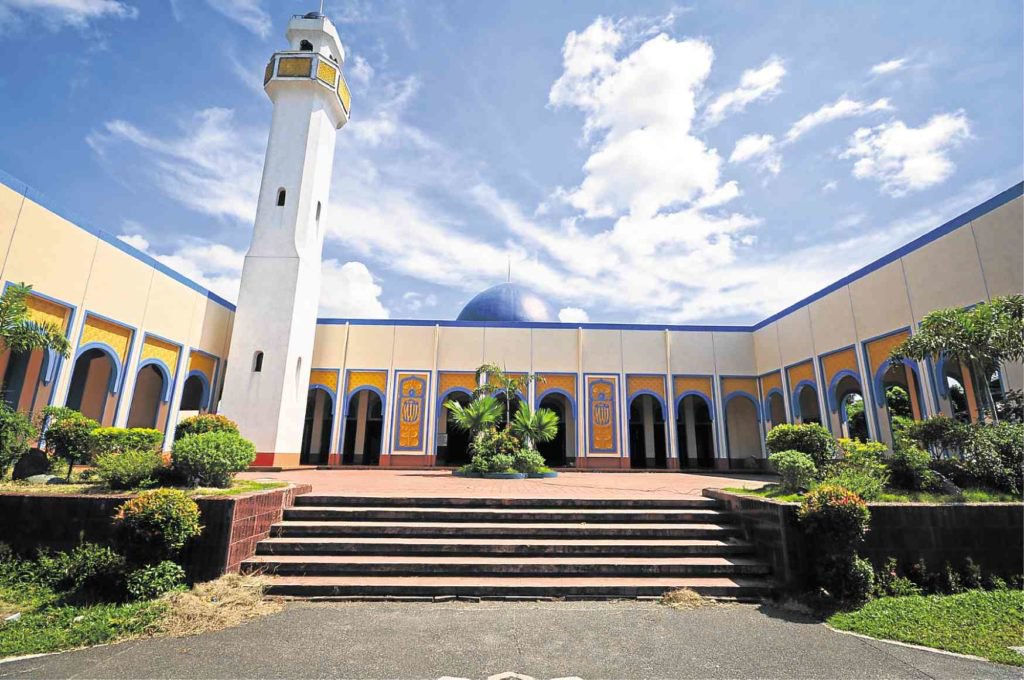 The Blue Mosque’s unusual architecture and multi-cross geometrical design is modeled after the Cordova (Spanish name for church) in Andalusia, Spain. It has a conference room, three educational classrooms or madalas, a library, clinic, the Secretariat, and the Imam’s office. 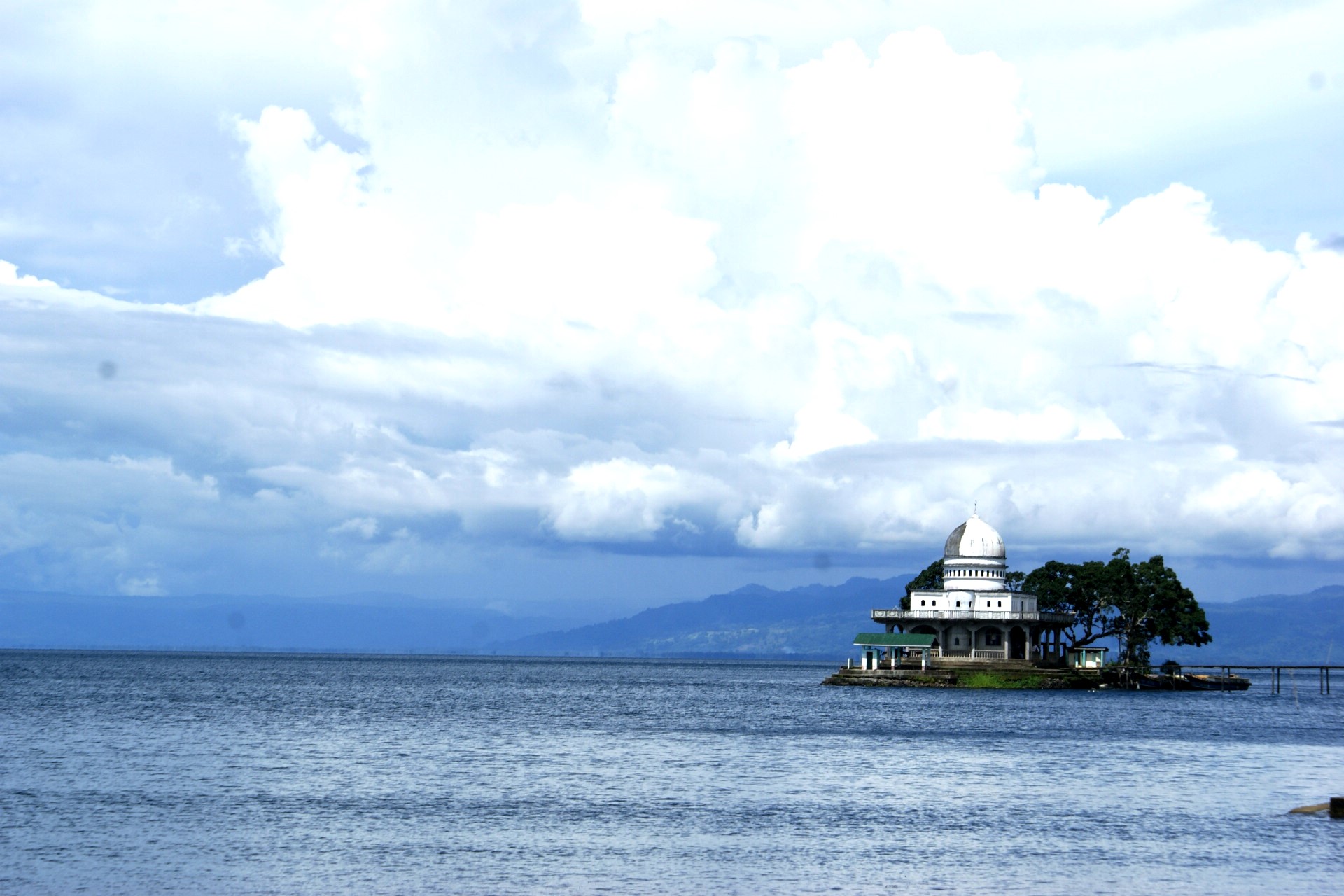 The White Masjid of Polo Barakat is one of the municipality’s many mosques, distinctive in that it was built on an island and has been serving the inhabitants for the call of prayers, ceremonies such as reading wedding rituals, and where locals prefer to gather for the Khutba and other Islamic activities.

It used to be only accessible by bamboo poles until an opportunity brought it to the attention of then-ARMM Regional Governor Ansaruddin Hooky Alonto Adiong, who contributed funds to make this historic Masjid accessible to all.

From afar, the mosque’s structure is evocative of the modest white houses in Santorini, Greece, where vestiges could perceive the opulence that is equivalent to the proud Municipality’s cultural legacy.

10. White Mosque by the Bay in Tawi-Tawi 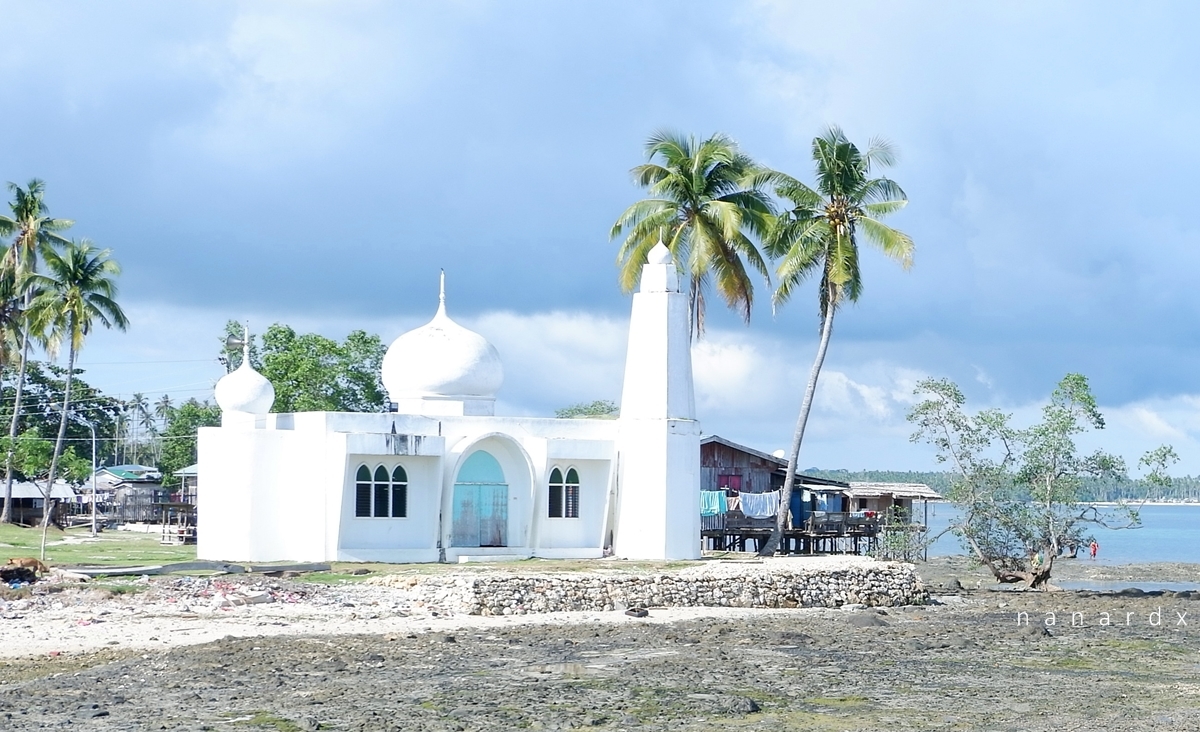 A little white mosque gleams barely meters from the Tawi-Tawi waters in the small town of Bongao, Barangay Tubig Tanah. Despite its small size, tourists seem to enjoy something about this mosque. It’s even been described as an igloo-inspired mosque by some. The modest setting of this mosque by the bay, surrounded by manicured Bermuda grass and old towering coconut palms on a clear day, is what makes it so lovely.

This little yet lovely bayside mosque is next to the Tawi-Tawi province governor’s residence. 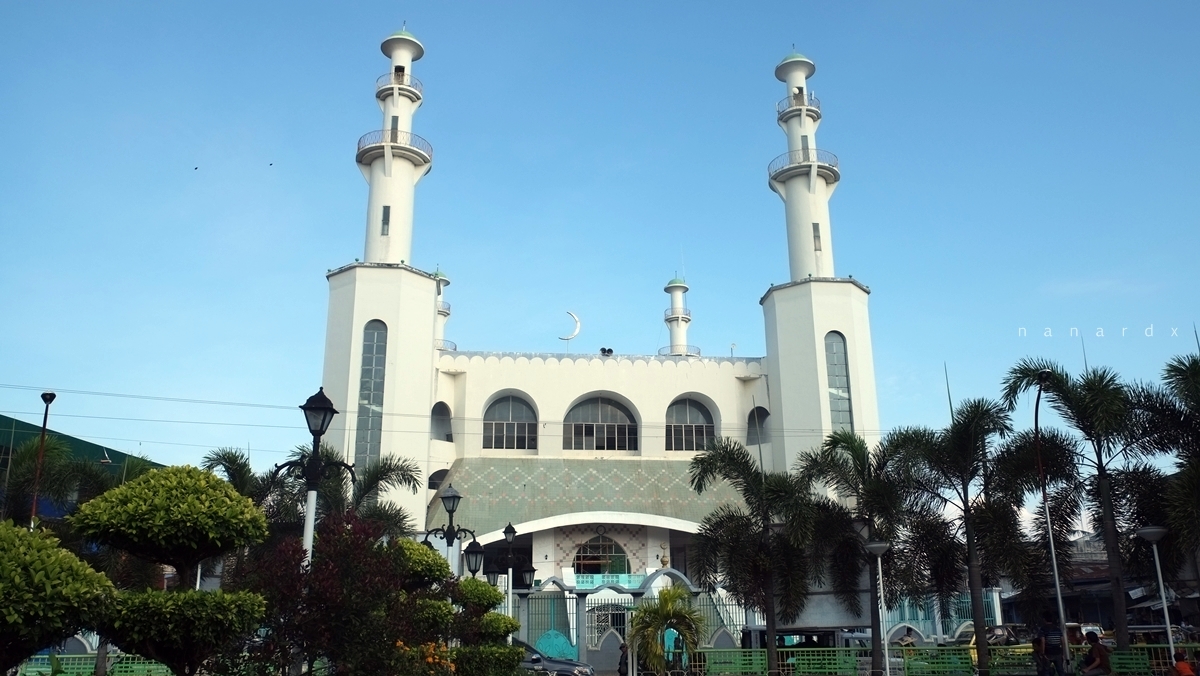 Aside from the Sulu Provincial Capitol, Masjid Tulay, in the town center, is another notable monument in Jolo, the province’s capital. Masjid Tulay, also known as Tulay Central Mosque, is the oldest mosque in the province of Sulu. It was founded in 1884 and has witnessed many historical events. It was destroyed in 1974 by the government’s fight with the Moro National Liberation Front and restored in 2001.

Masjid Tulay is also Sulu’s largest mosque. It has a capacity of 5,000 people. This incredibly exquisite mosque was dubbed the “Little Mecca of Lanao Del Sur” in the mid-1900s. The Bacolod Grande Mosque is located in Barangay Lama, Bacolod-Kalawi, Lanano Del Sur Province. Dark green colors are used to paint the structure. Green, like other mosques painted in the color, is a classic Islamic color that has long signified Islam. Green is said to be the Prophet Muhammad’s favorite color, and it is featured in several Quran verses as the color that the residents of heaven shall wear.

The mosque, which overlooks Lake Lanao, has gorgeous and unusual architecture.

Have you been to any more mosques that we missed? Please let us know in the comments so that we can pay them a visit!

May the festival of breaking the fast bring all the joy and enchantment of love together for our Muslim friends. Eid Mubarak! 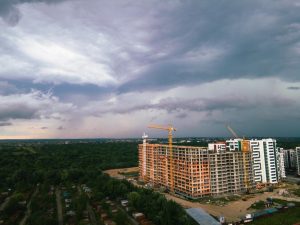 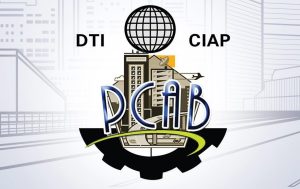 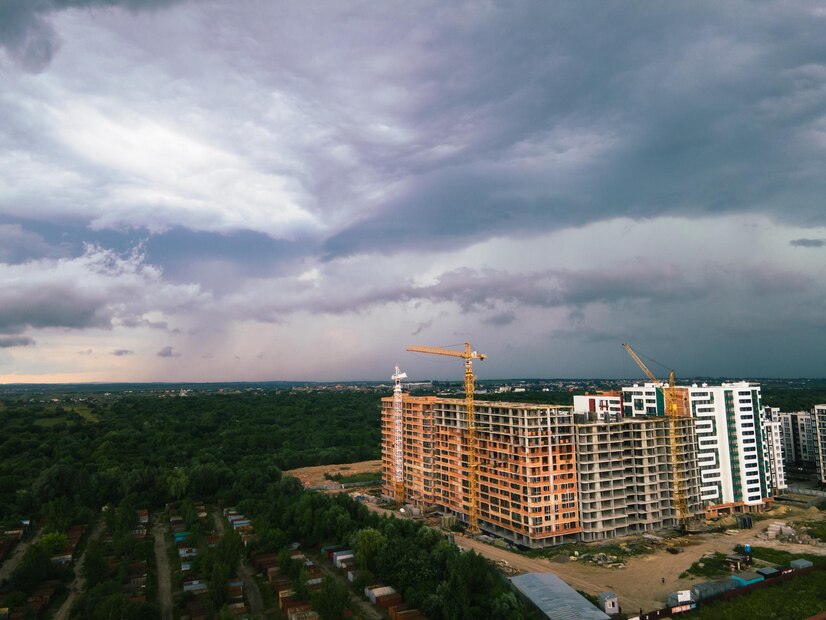