The success of PHILCONSTRUCT VX has proven to many that the gambit of turning a construction materials and technology exhibition into an online event is a good decision. As far as first impressions go, the first virtual construction show in the Philippines certainly had a lot of charm and effort put into it. After all, digitizing the awaited show is not without its challenges.

Pinoy Builders reached out and had a Zoom interview with PHILCONSTRUCT’s Event Chairman Junn Elepaño to help shed some light into the annual show’s early difficulties for the 2020 iteration, and future plans for next PHILCONSTRUCT events.

Facing The Challenges of Going Virtual

PHILCONSTRUCT has always done physical shows in the past. The most common concerns usually pertain to space limitations and good atmosphere for visitors and exhibitors. Unfortunately, 2020 brought about the new normal, enforcing strict social distancing and commute laws to deter the spread of COVID-19. Numerous scheduled events were either delayed or canceled outright. In contrast, others have decided to stand their ground and adapt to the situation by utilizing the digital space.

It was not an easy decision to make for the people behind PHILCONSTRUCT, as the cons seem to outweigh the pros at first glance. When Event Chairman Elpaño was asked about this, he mentioned that there were a couple of concerns that loomed over them during the planning phase.

“Our biggest worry was that we did not have a platform to use. We also have to consider the infrastructure here in the Philippines when it comes to using certain platforms. This includes internet and bandwidth availability. So the platform has to cater to those challenges to be able to present this virtual show.”

“[Doing a virtual show] has never been tried, so it was really a risk for us. It was a proof of concept to do it that way, that this virtual show will be accepted by the visitors and the exhibitors.”

Eventually, PHILCONSTRUCT VX decided to go through with it, announcing the move to virtual back in July. The awaited trade event used two platforms, one of which was EventXtra. The other is VX EVENTS, owned by PHILCONSTRUCT VX’s event manager Global-Link MP Events International Inc. The platform has been used for other successful virtual shows. Once plans were set in motion, doubts during the event’s conceptualization phase slowly turned to optimism.

“People just don’t realize it, but the advantages are just the tip of the iceberg on what we can get out of going virtual,” Elpaño said.

One of the main advantages of PHILCONSTRUCT VX is that everything is less costly for everyone involved. Elpaño mentioned the most common challenge for exhibitors is bringing their products to the venue itself. By going digital, they have a perfect opportunity to simply showcase their inventory in the virtual exhibition hall.

“It is also a good advantage for international exhibitors because they don’t have to worry about travel expenses or the burden of bringing their products or equipment into the country,” he shared.

Elpaño added that it was normally costly for them to prepare, even for foreign Technoforum speakers. A virtual show does not only make things easier for booth handlers, but more successful in getting more foreign speakers for the seminars compared to the previous years.

Another critical advantage is the ease of networking between exhibitors and visitors. Those interested can click on the company of their choice and chat with the booth handlers directly. They can also leave messages if they do not have the time to converse. This is an excellent opportunity for the exhibitors to collect raw data on public interest and leads and set up meeting schedules with their visitors on the fly.

“I think the biggest advantage for the exhibitors is the information that they get in a virtual show. Here, you have a lot of data that you can really capture. In a physical show, you are dependent on the people you assign to your exhibit. With the virtual show, you get information immediately, whether it’s the number of virtual booth visitors in a day or the number of clicks your products got during the event.”. 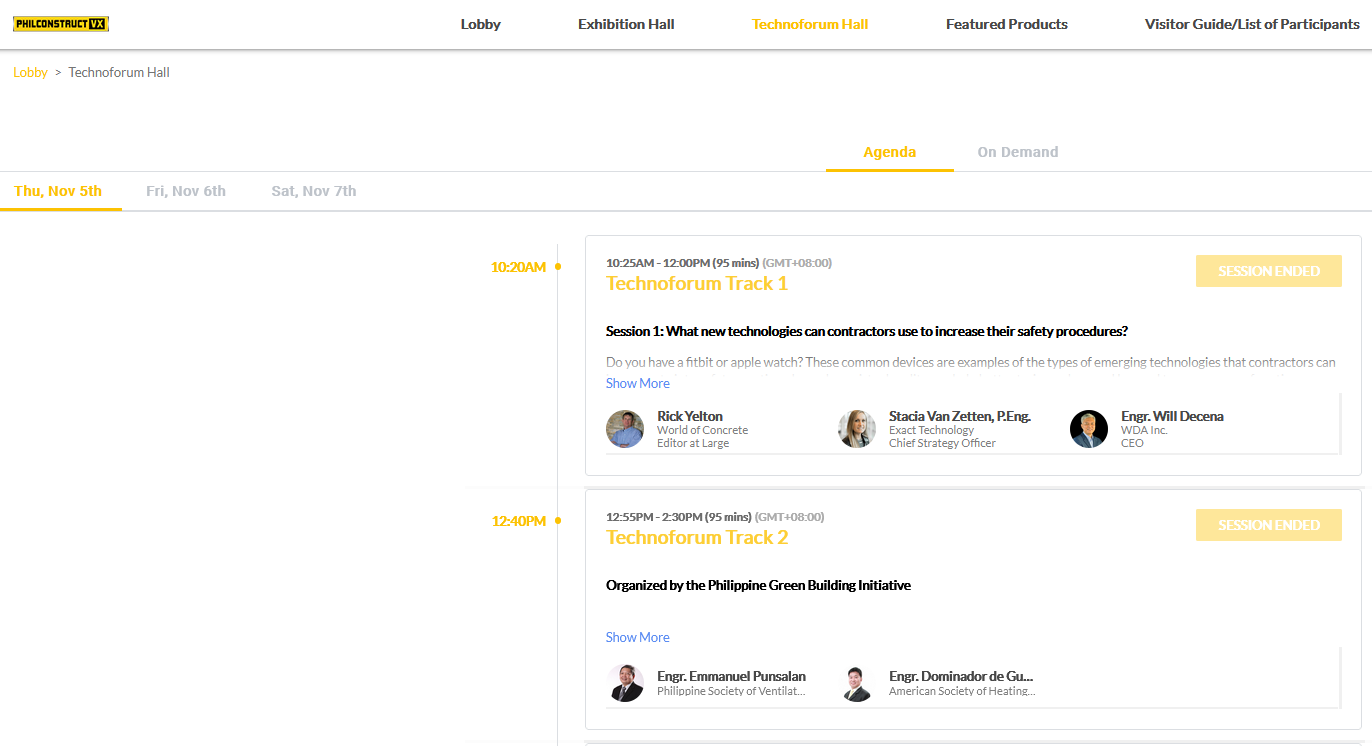 When asked about its main shows, Technoforum and Estilo De Vida, Elpaño mentioned that the former had nothing to lose from going virtual, given that webinar-style shows have been a thing even before the pandemic. In fact, he believed that it would eventually go full-digital regardless of whether the new normal is being enforced or not.

As for the annual Estilo De Vida Interior Design contest, the event chairman said that they have pushed for them to do a virtual version before, in a way that promotes and supports the show outside of PHILCONSTRUCT VX. In the event itself, the Estilo De Vida booth featured a link that provides visitors a 360 digital showroom feature of finalists’ works.

While a full virtual interior design contest is far from feasible because of the judging process, the use of such showrooms is still a great way to expose the beautiful works to the public through digital.

The most prevalent difference with going virtual is that virtual shows are undeniably a different experience to physical shows. The excitement of going to a venue and participating in live events is simply not possible from behind the screen.

“The excitement of having a lot of people around is not there. I guess that’s the biggest factor in a virtual show. Wala na ‘yung excitement na, you know, na if you rub elbows with a lot of people, and probably, the fun of meeting your friends and enjoying the event with them.”

Getting a close look at new equipment and construction machinery is also lost in an online digital format. While this seems trivial in times of social distancing, this can factor in on whether or not virtual shows have a place in PHILCONSTRUCT once things go back to normal.

Despite the loss of such social excitement, the convenience of a virtual show acts as a good compromise, especially since the event could be accessed through most smart devices such as phones, tablets, and laptops.

Elpaño remains confident that this undertaking won’t just be a footnote in PHILCONSTRUCT’s history. With the hypothetical scenario of things going back to normal in 2021, he mentioned that a virtual version can return either as a separate event or a hybrid show to coincide with the main physical shows.

Although it’s too early to tell what PHILCONSTRUCT will do for the 2021 shows, they are hopeful for a concrete return to the traditional format, keeping the virtual option close and ready. The idea of using advanced virtual tech like holograms once it’s less expensive to implement is something the organization looks forward to.

Technology has always been a part of PHILCONSTRUCT. It is only natural that the show will continue its goal of pushing for adaptive innovation with its virtual show. In fact, there was a banner in the event’s virtual booth teasing a focus on New Technologies and Smart Cities for its 2021 show. This is something people can look forward to; future innovations that the industry has to offer and the promotion of smart cities for the betterment of the country.

The future looks bright and there’s a lot to look forward to in next year’s events.

Want to stay on top of the news concerning the annual event? Get in touch with Global-Link at (632) 8893-7973 for more information about PHILCONSTRUCT in 2021. Feel free to follow the official PHILCONSTRUCT Facebook page as well!